Saturday by Ian McEwan and London Blues by Anthony Frewin 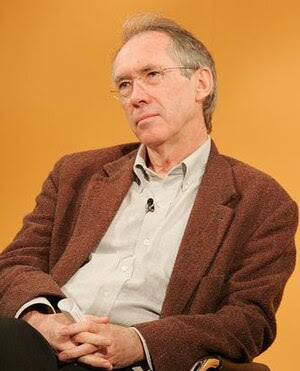 Image via Wikipedia; public domain
Saturday by Ian McEwan, 2005, Vintage Books
First sentence: Some hours before dawn Henry Perowne, a neurosurgeon, wakes to find himself already in motion, pushing back the covers from a sitting position, and then rising to his feet.

I was enjoying this book so much right from the start that I rationed my reading so that it would last longer. Set in London just before the Iraq war, it deals with the experiences of one Saturday in the life of a family and centres on the husband/father who works at a nearby hospital.

Awakened in the early hours at his house in Charlotte Square, not far from the Post Office Tower, he sees a plane headed for Heathrow, but apparently on fire.
His wife still asleep, he goes downstairs where his son is in the kitchen ending his day. They talk about the daughter/sister who is arriving back home in the afternoon.

The son is a 'Blues' musician. He chose not to go to university but pursue instead his interest in music, and has already found success and achievement. The daughter is a poet who is about to publish her first collection. Her mother´s father has been an inspiration to her but more recently they fell out. He is also coming to stay and a reconciliation is hoped for. His large house in France, close to the Pyrenees, was where the family had spent memorable holidays as the children were growing up.

Perowne is due to play squash with an American colleague that morning. He sets off in his Mercedes and finds the streets crowded with anti-war demonstrators gathering for a march to Hyde Park. Normally he would be able to cross Tottenham Court Road but access is being closed off. A policeman allows him to drive across as the road is still clear at this time. Entering the road at the other side, a car pulls out in front of him. He swings away but there is contact; the other car loses a wing mirror. He gets out of his car to be faced by three threatening types from the other car................

The incident leads to everyone mentioned so far in this account (except the policeman) being involved in a tense situation at the Perowne´s house in the afternoon of that Saturday. You would expect a knife to appear at some point given the frequency of knife-crime in cities.


The story has a grandeur, a word McEwan uses a lot, but it is present in the locations, occupations and activities of the Perowne family. These factors will also be aspirational or admirable to many who would read the book. In fact, to complete the presitigious mix of occupations in the family, the wife is a lawyer. There are insights into the hard-working earlier married-life of the couple, living in a flat in Archway, to complete the picture of their rise to a deserved success.
Something, you are sure, is going to go very wrong indeed. But how will this meritorious family come through? Do they deserve to? Does the author have an attitude about them, and if so, whose side is he going to be on?
I also enjoyed, aside from the main plot, the London setting, plus a recipe for an expensive fish soup, and the summaries of the cases for and against the Bush/Blair war against Iraq. Which characters line up for and against the war, do you think? And what happened to the plane so ominously on fire over London?
No hesitation: ten out of ten! 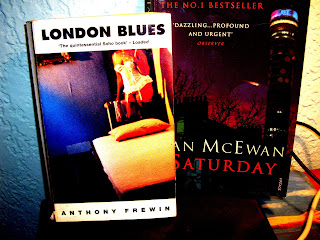 It was lined up on my bookshelf for years, unread, probably left for me by Nick, my son, a worldchamp reader whose idea of a holiday is to sit where it is warm and read, read, read. I eventually took it up and read it in January, 2006. I was probably feeling like some contact with London, where my wife and I had a house for 14 years. Reading the book brought back memories of an earlier period when names like Profumo, Stephen Ward, and Christine Keeler were in the news and scandal columns of the papers.
The book was better than it looks. The girl on the cover 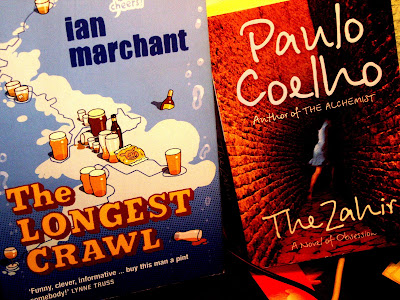 The Longest Crawl (2006) Bloomsbury.
It´s a pub crawl from the Scillies to the Shetlands in one month: the Turk´s Head to the Baltasound Hotel.
First sentence: I grew restless this evening, and walked through the lanes by starlight for a drink in the next village with my friend Bob.

After a dull start it got better. At first I did not like the personality that came through the early pages but he gradually got my respect. Apart from a ´longeur´about licensing law, he kept me with him all the rest of the way. The three-way division of places to drink, alehouse, tavern and inn, was well explained. Marchant found interesting economic and literary influences in connection with pubs, and he had an obviously sincere appreciation of the beverages consumed in them. His knowledge of music I took on board without knowing most of the references. The pub quiz is now a feature of pubs countrywide which doesn´t surprise me, but it does bring all kinds of characters into the limelight. In the Cotswolds he went to church along with tanned elderly couples recently holidayed in 'Gozo, or wherever'.
The place name awoke a memory which turned out to be of Gizo. And not many people have memories of Gizo. It is antipodean whereas Gozo is mediterranean.
I have never been to Gozo near Malta, but as one of an official party of recruiters for colleges and government offices in Honiara, Solomon Islands, I have certainly been to Gizo, to visit the secondary school there, where the girls were topless. I went back there recruiting the next year.

Ian Marchant is a stand-up comic , musician, marijuana-smoking, beer-drinking writer with an ex-wife and a girl-friend, what else?

Well, a good writer certainly; eight out of ten!


The Zahir by Paulo Coelho (A Novel of Obsession) Harper-Collins, 2006
First sentence: Her name is Esther; she is a war correspondent who has just returned from Iraq because of the imminent invasion of that country; she is thirty years old, married, without children. Second sentence: He is an unidentified male, between twenty-three and twenty-five years old, with dark, Mongolian features.


The obsession is probably to get back to his wife - who left him for their own growth and change. Kazakstan is the place he goes to do this. I had to pause here to get Sacha Baron Cohen out of my mind before going on.

The Mangan Inheritance by Brian Moore, and The Sportswriter by Richard Ford

Brian Moore; The Mangan Inheritance, Published 1979. Flamingo Press. This is not the first book of his that I have read. My son told me to read this author some years ago.

'The doorbell.
Mangan went to the front door, looked through the peephole, then unlocked.' (first sentence)

There was no dramatic confrontation at this door opening, but there is a highly dramatic one in a derelict ruined castle on an Irish hillside later in the book.

James Mangan, son of a Montreal newspaper editor, and a published poet, given an assignment to interview Zero Mostel, meets Beatrice, a Broadway and film actress. They live in New York, he in her shadow, as his attempt to continue with his poetry is unsuccessful. 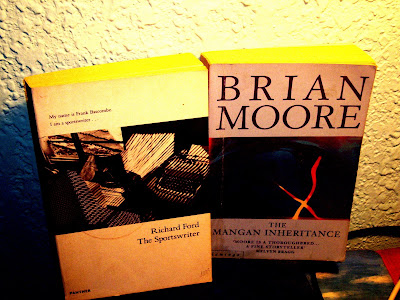 He leaves behind his comfortable but unfulfilling life in New York after finding documents and books relating to an ancestor back in his father´s home in Montreal where he goes alone for Christmas. The putative ancestor, also James Mangan, intrigues him and he goes to Ireland to trace this man´s descendants and any proof of a direct connection to himself.


The contrast between the warmth and comfort of his affluent life and the bleak countryside with its lifestyle of poor unsophisticated people is cathartic for Mangan, the Canadian. He feels closer to real feelings, to life in the raw in the area he comes to south of Bantry. The local hotel is closed and the priest makes arrangements for his accommodation. He makes contact with local people. There is a mystery surrounding the behaviour of the Mangan descendants that he meets, and eventually our affluent hero finds a Mangan poet, in the wild, and measures the experience against the life of the leisured, cultured city man.
Who would you rather be?
I will not give away Mangan's choice. Nor any more of the absorbing story which is a good read. I gave it eight out of ten. And I knew which life I would prefer given Mangan´s choice. And I liked the idea that he could have a choice.


is another story about a writer who has early success but considers he has failed by going on to be a sportswriter.
My daughter brought a copy of the book to the house when she came on holiday two years ago. She didn´t read very far before saying it was 'a man´s book'. Her husband, Steve, had read it and enjoyed it so she had given it a try. I too had started it and left it some years before, thinking there would be lots about American football and baseball, neither of which I could get excited about. And now there were two copies in the house. Maybe I should give it a chance. It turned out that the story is really about Everyman struggling to find a purposeful life.

The first sentence: 'My name is Frank Bascombe.' Second sentence: 'I am a sportswriter.'
My version published by The Harvill Press, London, 1996, copyrighted in 1986.
I recall a scene near the start when Frank goes to interview an injured football player in a wheelchair. The injured man is bitter and so is the weather on his street leading down to Lake Michigan as the two men go outside to talk.
Our hero, Frank, had a book of short stories sold to a film producer after his university course at Ann Arbor, Michigan. Married, but separated after the death of a son, he remains in touch with his wife and two surviving children who live close by. I had no problem finishing the book this time.
Eight out of ten.
End.