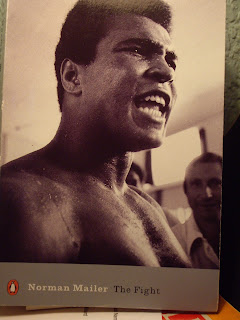 In 1975 at Kinshasa in Zaire, Mohammed Ali met champion George Foreman in a fight for the World Heavyweight Championship. Could Ali regain the title against the undefeated Foreman?

I had forgotten who won this fight in the heart of the continent of Africa - where many Americans have their roots. Mailer, very often referring to himself as Norm, shows an insight into boxing and the outlook of the boxers and all those others involved in the sport at the highest level. Together with the racial politics, the equatorial climate, the poverty of most of the population compared to Mobutu's garnered wealth -the fight itself has a complex background which Mailer vividly explains.

A gem of a book. Mailer knows he is dealing with magnificent characters. He also understands their excellence despite the brutal nature of the sport. I am not going to remind you who won 'the Rumble in the Jungle' but in any case it is much more than sports reporting. Just get hold of a copy!
Posted by Halvenon at 18:57 No comments: