Master and Commander by Patrick O'Brian, 1970, Harper-Collins and 19 more books in the series 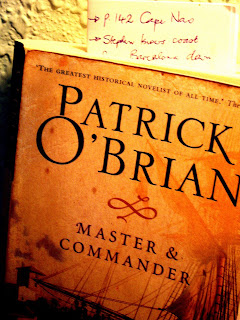 The first book of a marvellous series of 20 historical novels based on British records of actual events involving the Royal Navy during the Napoleonic Wars. Excellently described elsewhere, these books are ones that I often return to. They are full of incident, character, the social and intellectual attitudes of the times on land as well as sea, and using the language of the times. O'Brian's wide-ranging research into the sciences of the time particularly Botany and into the practice of Medicine when 'bleeding' was still considered a treatment, and into the historical settings of the time in Australia, Mauritius, Chile and Peru, France, Spain as well as England bring a great feeling of confidence in the content and delight in its variety throughout the series of books. O'Brian was brought to a wider audience by the film starring Russell Crowe, which used content from three books of the series and the title of the first book.

I remember years ago, around 1996 perhaps, waiting to read the next of the series as soon as it was published. These would have been: The Commodore, The Yellow Admiral, The Hundred Days, and finally Blue at the Mizzen. O'Brian died in January, 2000 aged 85.

The esoteric terminology of all the paraphernalia of ships with sails is also present but you may, if you wish, be as impatient with it as one of the main characters, Stephen Maturin, the surgeon, as there is so much more to relish. Master and Commander Jack Aubrey is an action man who also plays the violin,