Desmond Bates, a university teacher of Linguistics (Linguistics is about describing languages rather than learning them) retires early because of deafness. The story is mainly about his relationships with three people. First, with his wife who with a female friend developed an interior design business. Secondly, with his father living alone in the former family home and getting increasingly frail and cantankerous. Thirdly with an American post-graduate female student who gets in touch with him for help with her thesis on the structure of notes left by people who committed suicide. 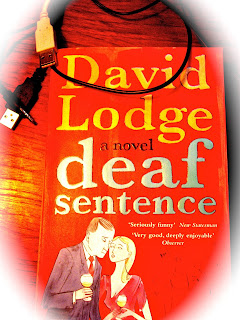 These characters provide the main background for plausible situations in which his deafness leads him into uncertainty and inevitable comedy. Alex, the American woman provides some sexual excitement and threatens a quiet life. In his relationship with his father he is compassionate in dealing with a spiky oldie, including the funeral. On a visit to Poland during a British Council sponsored lecture tour Bates visits Auschwitz and Auschwitz-Birkenau, the latter the extermination site. Compared to the horrors that took place there, the threats and difficulties of life with deafness must seem easy to endure. Perhaps that was why the author included the visit in his story.