Daughter of the Desert by Georgina Howell. Pan Books, 2006 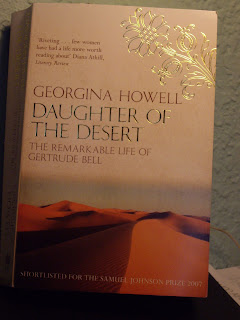 The title's 'daughter of the desert' was Gertrude Bell, an ironmaster's daughter from the North-East of England. The book itself was a birthday present from my daughter, Pippa. We are both interested in Gertrude's life and achievements having first met her in a novel based around the Cairo Conference, 1921 when she met with Churchill, T.E. Lawrence and others to negotiate the governance of Mesopotamia, the region we now refer to as Iraq. The origins of present-day Syria, Jordan, Israel, and Palestine also come into Gertrude Bell's story.

What was Gertrude doing there? Well, it is a great story. She explored the Arab areas and made friends with the sheikhs and other Arabs who worked for her on her expeditions.  Remarkable, given attitudes towards women in this region. She learned Arabic and several dialects. She respected and loved their culture and became a major source of information about it.

She came from a very close family and before she went to the Middle East she had been the first woman to gain a double first at Oxford - not many women even got to university then. She became an intrepid mountaineer known to and respected by the male guides and climbers of her day. The climbing episodes I personally found a bit boring but the account of her life as an expert on the Arab world throws a great light on why and what the military are doing there now. The British and French, for example, last century, as allies fought a war in the area against the Turks. Oil for the British Navy was a strong interest. At the time of the First World War 1914-18, the Turkish Empire which controlled the area, was gradually being eased out by force and politics.

Gertrude Bell would have been horrified