John Masters and his books

Have you heard of the film Bhowani Junction, made in 1956, starring Ava Gardner? The story was from a book by John Masters. There is a review of a biography of Masters by John Clay referred to on this blog http://www.bookride.com/search/label/biography. (Look for a piece dated June, 2007)

Masters' books were popular in the 1950s and 1960s which was when I read several of them. He wrote a series of 7 books dealing with one family through the period of the British rule in India:

Coromandel; The Deceivers; Nightrunners of Bengal; The Lotus and the Wind; Far,far the Mountain Peak; Bhowani Junction; To the Coral Strand

- a set of interesting titles. I still remember with dread the Thuggees who preyed on travellers in India, described in the second book. It is a strong warning against accepting help from seemingly sympathetic people when you are in unfamiliar areas. 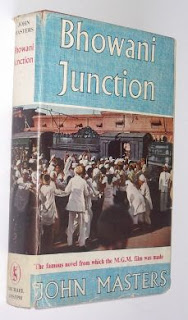 For a full list of his books, and details of his life ....read
Posted by Halvenon at 22:00 No comments: