Stalin:The Court of the Red Tsar by Simon Sebag Montefiore (2004) 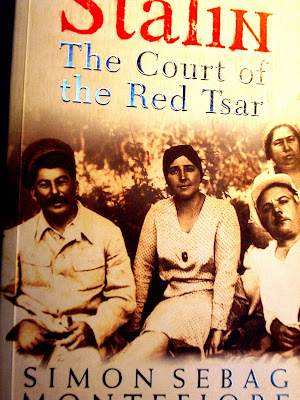 Stalin, Bulganin, Kruschev, Molotov, Beria, Yezhov, Mikoyan, Zdanov, Zhukov, Kaganovich, Voroshilov and so many others are associated with mass murder in the name of a cause, but in the end in the name of one man's egomania. The size of the author's research task on Russian documents must make the book a research epic (720 pages). He managed to do it all in 5 years from Kremlin archives to publication. The killings are weird to read about because their scale is so great and within the lifetime of this reader. Then later a few thousand deaths here or there seems banal in face of the millions of individual tragedies. Even among comrades and colleagues Stalin got rid of those he got tired of, or suspected of outshining him, or of being an alternative leader. And he could always read a report or receive a verbal account in person from torturers 'working' not far away in the Lubianka. He headed a team of Commissar-Butchers who would take a train to a region and arrange executions of local officials by the hundred, or even greater 'units' sometimes, in order to solve some 'problem'. Poskrebyshev, Stalin's ' Cabinet Secretary' with his space outside the door to Stalin's office,