The reluctant police lieutenant Mario Conde, "The Count", is given 3 days by his chief to solve the murder of a Cuban returnee (from the USA) whose body was found on a beach. Set in Havana, the atmosphere of loyal friends and their enjoyment of eating and drinking together is an effective one amidst the decay of the city under Castro. The Count is a reluctant policeman, always thinking of leaving the police force. Meanwhile, he learned of ancient treasure shipped from the Philippines to Cuba and then to Spain. There is a golden Buddha involved. This reminded me of The Maltese Falcon a story by Dashiell Hammett, made into a film, 1941. The icon ornament of this earlier story, a black falcon, was also on its way to Spain.

Back to Havana Black: apparently when Castro's regime came to power a lot of private property was appropriated by the state. Perhaps not all of it found its way into the state museums and galleries. The book is one of a series with Mario Conde doing better than that other Count questionably "eating kippers with his mother-in-law tonight". Eight out of ten.

The quote about another Count comes from the tv series Monty Python where the question "Is the count eating kippers with his mother-in-law tonight?" is used as an absurd password.

Posted by Halvenon at 10:18 No comments: 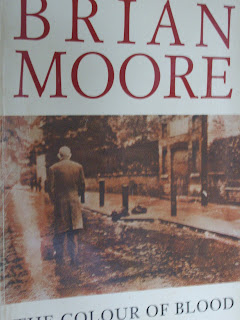 The Colour of Blood, 1994. Set in a communist country possibly an amalgam of Czechoslovakia, East Germany and Poland, before the end of the Cold War. Cardinal Wem survives an assassination attempt but is kidnapped the same night by what are perhaps a group of Roman Catholic rebels. Do both State and Church rebels have it in for him?

There are mysterious cars following other mysterious cars. The Cardinal escapes and tension builds up around him. A faceless malevolence met in other stories about countries behind the iron-curtain seems to surround events which build up to a climax in the days before a Church festival celebrating a martyrdom 200 years earlier. The Cardinal is determined to attend. In the presence of the Prime Minister and with anonymous Security Police in the congregation, the Cardinal speaks out against violence. He gives communion and sees a face he remembers. Eight out of ten. Very strong on atmsophere. Brian Moore's (same author) 'The Mangan Inheritance' was the first book reviewed on this blog, see below. You can also follow the link to the dangerous life of a real Cardinal. 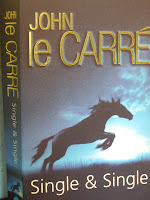 Single and Single by John le Carré, 1999
A traditional English gent in tweeds with son in Public School, a minor one but nevertheless...
Read more »
Posted by Halvenon at 18:38 No comments: