A Fool's Alphabet and Fairness 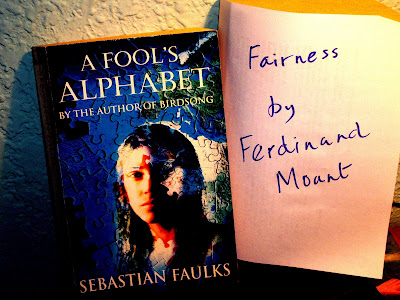 A Fool's Alphabet by Sebastian Faulks, 1992, pub. Vintage.
Guess how many chapters in the book. The first starts with A for Anzio, where the soldier to become the father of the main character, Pietro, is wounded (Second World War) and is nursed by Francesca, subsequently Pietro's mother. Phases of Pietro's life are described going through the alphabet to another location for each chapter. For credibility the hero is given the occupation of a photographer who is hired by publications to provide illustrations. The structure manipulates the story you might think; I certainly did. But then the structure always does, I suppose; it is just more obvious here. It is not easy finding a line to follow as the periods of the settings are as scattered as the locations. Where do you think location Z is? It is in Italy, and in 1970. The events in the book are set in Jerusalem, Ghent and Rome along with Zeneca and 22 other locations in the years from 1945 to 1980s mainly, but with one chapter going back to 1914. And to where? Belgium!
On skimming through my copy I cannot find where the Fool's Alphabet occurs. I think it must be there so if you find it let me know on what page. It goes something like this.
A is for horses B for mutton C for yourself D for dumb E for brick ..................................Z for breezes. Can you fill in the rest?
Why the title? Because life doesn't make sense and one version of it is as good as another. We are fools to expect more.

I enjoyed the book and gave it eight out of ten. If I have been laconic it is because I am jealous of the achievement. The structure of the book is a great way of stringing essays and stories into book form.
First sentence: Vesuvius was erupting.


Fairness by Ferdinand Mount, pub probably 2001.
My daughter, Pippa, recommended the book and it was her copy that I read so there will not be a photo of the real cover of this one, or a first sentence. Pippa had a house not far from Deauville at one time and my wife and I had visited the town several times with her and the story starts in Deauville. This kind of connection brought me readily to read a book that otherwise would not have attracted.
It did surprise me that I enjoyed this book! It may surprise you too when you read what follows. To start with: the main characters, Gus and Helen, are both teenagers minding kids for well-heeled families on summer holidays. Often in books, though, it is what people do in their time off that makes the story!
The title, so I thought, referred to the kind of 'fairness' as in 'None but the brave deserve the fair' because