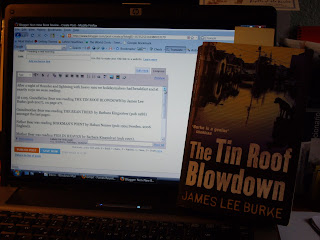 If Goldilocks had entered our house on a particular day in early August this holiday summer she would have found all six bears out (probably at the bear beach). If she had lain on our beds she would have found herself lying beside a non-new book left there by its absent occupant and current reader.

Grandmother Bear was reading THE COLOUR by ROSE TREMAIN (pub 2003).

This latest story by James Lee Burke describes Hurricane Katrina's impact on New Orleans followed by Hurricane Rita's on Texas/ Louisiana. There are vivid scenes of violence and squalor as the characters wade through floodwater and crimes too horrible to dwell on. There is beauty too always near in the tropical colour, sound and mood.

Detective David Robicheaux, fights his own instincts as well as criminals, trying to keep his self-respect alongside his strong wife and tough, adopted daughter. His loyalty to his violent friend Clete continually adds distractions to his workload, both public and private, in clearing up the mess of crime in the chaos made by the violence of the hurricanes and the looters. Through Robicheaux, Burke has plenty to say about political neglect and the conflict of factions in this part of the USA.
In the end though Robicheaux's public and private agendas coalesce through his friend Clete as they often did in the other books. If you have never read Burke's books before you have a great treat coming to you: strong on location in Louisiana (and Montana with his character Billy Bob Holland). Colour, crime, quirky characters and relationships give his books a grip on you that may not let you go. You will be in danger of returning often to New Iberia.

My grateful thanks go to Father Bear (above, reading an Icelandic author) who first introduced me to current American writers such as James Lee Burke (reviewed above), Elmore Leonard and James Ellroy. Would anyone like to send me a review of a book by one of these writers?

Please note the double value you get from this website: not just Goldilocks and the Three Bears. In my version there are SIX bears.
Posted by Halvenon at 12:29 1 comment: