Knole and the Sackvilles by Vita Sackville-West, copyright 1949 (non-fiction) 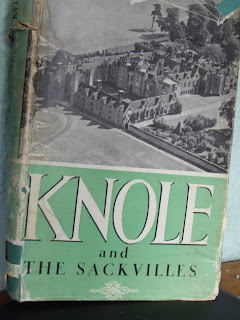 There were cricket professionals as early as the eighteenth century. Knole House in Sevenoaks, Kent had one or two on the staff. They have long gone but the cricket square is still there in the grounds at Knole. The grounds are undulating meadowland in a park with great old trees and a smarter garden close to the house. On one visit there with family by car (my family, not the Sackvilles) we had trouble keeping the deer from eating our sandwiches. You go for a quiet day out and this is what happens!

The panorama of Sackvilles, Earls, then Dukes, of Dorset is centuries wide so the family tree at the front of the book is needed often. The history of the house starts in the 13th century, and the history of the Sackvilles there began in the 16th when Queen Elizabeth gifted it to her Treasurer Thomas Sackville, Lord Buckhurst whom she made the first Earl of Dorset...with a house in Kent! Sevenoaks was closer to the office than Buckhurst in the Weald, the family's home. Thomas must also have sighed with relief when the Queen held court at Eltham or Greenwich rather than Westminster as it was also an easier commute.

One Shot by Lee Child 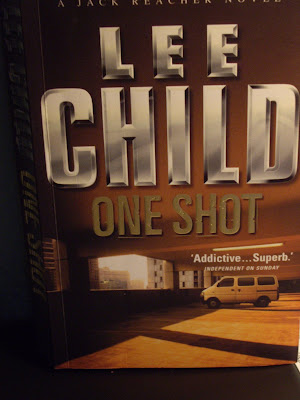 One Shot (A Jack Reacher novel) by Lee Child, copyright 2005

Jack Reacher is the writer's stock character, a Frederick Forsyth type of hero, a former military policeman, officer, currently living loose, without permanent address (I can't thing why - a loose cannon image perhaps?). Anyway, he is big, aggressive and a know-all to boot but somehow it works. Luckily I found I was reading a large print copy which managed to keep his character within limits. However, it is an uncomfortable size -and when you drop off to sleep it falls on your face, hard.

A rock solid case seems to put James Barr as the certain perpetrator of a massacre in a small Indiana town. Video and other evidence lead to Barr's arrest in bed at home. He will say nothing except "Get Jack Reacher!". It turns out that Barr had done a similar set of killings as a sniper in the army in Kuwait City. Yeah, it is one of those books in a long tradition - at least since the Crusades - that use the reflected 'glory' of characters who have been in a war to impress the reader. And it always works, doesn't it?

Emerson, the detective, Rodin the D.A., his daughter - newly qualified as a lawyer and a nefarious group of violent villains all have a part to play as Reacher gets to know them. As does an old flame of his, Brigadier-General Eileen Q, a military lawyer (How's that for a fantasy ..... whether in judge's wig or general's uniform with pips?) while gradually light is thrown on how the killings were done, by whom and why - although it is almost unnecessary in the end given all the other fun. Enjoyable, nine out of ten.

There are two interwoven stories: that of Inman and that of Ada. They meet and fall in love just before Inman goes to fight for the Confederacy in the Civil War. Ada, on her own after her father's death, waiting and yearning for Inman's return, meets Ruby whose practical skills help them both to grow food and endure the demands of wartime. They farm Ada's plot of land together. Meanwhile, Inman a wounded soldier in hospital, deserts to find his way back to Ada. He battles the horrors of walking through wilderness alone, needing to find food. Threatened by most of the people he comes across he finally comes up against Teague and his team. Officially sanctioned to capture deserters, they are really just a bunch of thugs given rein to get away with murder. Ada's story of overcoming hardship is inspiring while Inman's tale of outwitting enemies and stealing food is a grim one deserving its due reward. Does he find Ada?

Frazier uses archaic words to take us back to the times in the terrain as it was then, and to the food, use of herbs, and of building materials, and the rough conditions of the time, itself a time of war. He says he was conscious of similarities with Ulysses and Penelope in Homer's The Odyssey. He was a teacher of English Literature you will not be surprised to hear.
Nine and a half out of ten. Well worth reading, even if you have seen the film ' Cold Mountain' - also the name of real mountain in North Carolina. (Click on the title above for more information about the book)
There is no photo as the book is no longer with me!


Fatherland by Robert Harris, 1992, is at first the story of an investigation into racketeers who stole art treasures and sent them abroad. The policeman, March, is a sympathetic hero in his search for justice in a Berlin bureaucracy generally unsympathetic to his enquiries. Even more so when he finds evidence of the most unspeakably horrific crimes. Details of the holocaust are found in documents discovered by March. There are attempts
Read more »
Posted by Halvenon at 17:22 No comments: